The issue of reservation in Medical education in Nepal Let’s begin with a famous statement, “a professional can be a bad lawyer, a bad engineer but a professional cannot and must not be a bad doctor.” The motive with the statement is more than clear. After the establishment of federal democratic republic of Nepal after the long lasted monarchy, the issues of social and racial injustice and reservation in different socio-political arena are a topic of hot debate. It is high time to discuss the effects of reservation in medical education.

It is system based on the principles of social justice. A group of people, who were marginalized on the basis of caste, geography or sex, due to their poor approach in the mainstream politics in the history are given opportunity with affirmative actions in reservation system. The aim is to make all group of people equally capable in all socio-economic aspects.

Is reservation a bad idea?

No reservation is not a bad idea at all. It helps all those marginalized and unprivileged groups to stand together in the mainstream.

But there are some prerequisites for reservation. They are

·       There should be historical proof that a group on the basis of sex or caste system was underprivileged and was marginalized. It should be established statistically.

·       Reservation is always interim system. Based on the statistics of the marginalized groups, it should be projected for how long the reservation system be implemented. It cannot go indefinitely.

·       It should be ensured that the minimum quality be maintained while providing reservation quotas.

·       The reservation system should include the basic level. Reservation quota should go along with the uplift of the basic needs like education, economy and health status of the community.

·       Single person should not be eligible for multiple reservations at multiple level.

·       Only caste and sex shouldn’t be the basis of qualification for reservation. The socio-economic status of individual and his family should be taken into account.

What may be the potential drawbacks of reservation system?

·       It has its basis on history. The current living people, who were not responsible for the historical injustice are made to suffer based on historical facts.

·       Reservation is the greatest enemy of meritocracy. It definitely degrades the quality.

·       It causes brain-drain of the brilliant minds who are now marginalized due to reservation system. Its huge loss to any country.

·       Reservation system based blindly on caste and sex, opportunists get the advantage and yet the needy people might never get the benefit.

·       In corrupt political background, like in south Asia, it is the key to vote for the political parties. Parties are afraid to withdraw the system and there is risk of reservation system going for longer period than it should be expected to run.

Why no reservations should be the policy in medical education?

Medicine deals with the lives of people. So this arena requires more knowledge and skill. A doctor needs to be skilled rather than representative of a defined caste or sex. The basis of reservation is, there is disparity between the beginning platforms for two groups. But medical education begins after intermediate level with science in biology, with the first division merit at least. So its false assumption that one person from a caste with the same degree is underprivileged or weaker than the fellow friend who has the same degree with similar marks.

In Nepal, there is reservation till the level of MBBS level. But so called caste activists and regional politicians are asking for reservation in post-graduation level and even PhD level, which is absolutely disgusting. These types of political stunts will definitely harm the society and the country by producing sub-standard specialist doctors. It should be prevented at all costs. 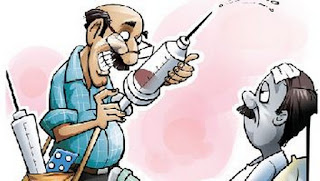